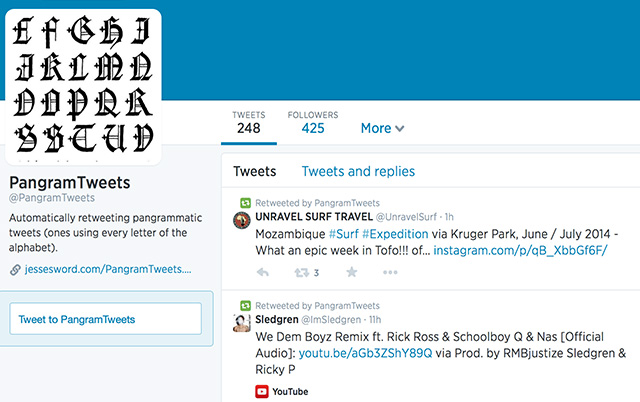 PangramTweets is a Twitter account created by American Dialect Society president Jesse Sheidlower that utilizes a bot to locate and automatically retweet tweets that use every letter of the alphabet.

You may find the results interesting, or dull. I make no judgment on this. The bot is entirely automated; I do not curate the results.

There is some filtering, however, to eliminate nonsensical tweets and those written in another language. Some of the included tweets knowingly use the entire alphabet, but most of the pangrams appear to have been created by accident.

Just got power restored.With help from family,we saved our frozen n cold food,except of a quarter gallon milk.Until the next bad storm lol.

It's better to have fewer things of quality than too much expendable junk. – Rachel Zoe