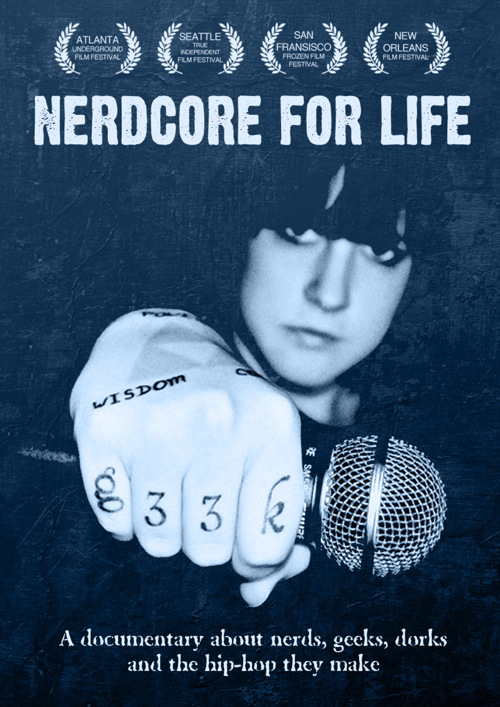 “Nerdcore For Life” is a documentary by Dan Lamoureux about nerds, geeks, dorks and the hip-hop they make has just been officially released and is now available on DVD and Netflix.

Two of the 21st century’s most powerful social forces; Hip-Hop and geek culture collide head-on in the feature-length documentary, Nerdcore For Life. Born on the internet, Nerdcore Hip-Hop is rap music made by geeks, for geeks and covers such traditionally nerdy topics as comic books, video games, sci-fi, anime and technology. This new and fascinating genre is founded on “Do It Yourself” ethics and most Nerdcore rappers create their music on home PCs and disseminate their work for free on the internet.

Though it has existed on-line for almost a decade, only recently has Nerdcore gone from being an internet fad to an underground cultural phenomenon. Filmed over the course of two years, Nerdcore For Life profiles the top names in the genre as they celebrate “geek Life” and their passion for hip hop to the fullest, fight anti-nerd stereotypes, and attempt to overcome the common obstacles that block musicians of all types from fulfilling their dreams. The documentary follows these dedicated artists as they go from recording rhymes in their mother’s basement to performing live for thousands of cheering fans. From their first song to their first MTV appearance, Nerdcore For Life chronicles the amazing transformation of a group of unknown nerds into internet celebrities and rising hip-hop stars.

See Previously: Nerdcore For Life, A Documentary About Nerdcore Hip-Hop