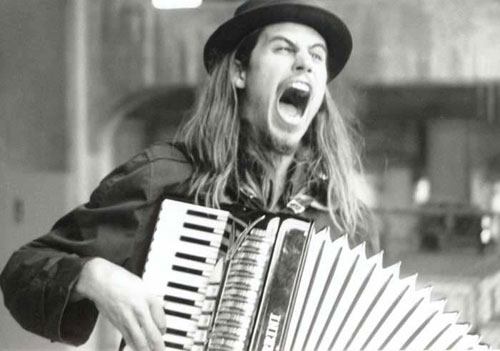 The Monsters of Accordion III is coming to town this weekend. On Saturday, August 27th they will be in San Francisco at Ace Auto Dismantlers (one of our favorite venues ever) and on Sunday, August 28th they will be at 21 Grand in Oakland. Saturday night’s show at the junkyard is brought to you by Chicken John of the now defunct Odeon Bar.

The Monsters of Accordion features Jason Webley, along with Daniel Ari and Duckmandu (aka Aaron Seeman). It was originally started back in 2003 by Kimric Smyth, proprietor of the amazing Smythe’s Accordion Center in Oakland.

The Odeon might be gone, but if Phoenix is working the door, Ena is tending bar, Neives is organizing everything and Chicken John is losing money on it, it’s still the Odeon to us. Join us at the Odeon’s home away from home: Ace Junkyard. Come see Bill the friendly Junkman stand behind his counter like a caged animal. Marvel at #3, half man, half dirt. The junkyard shows are totally fun and totally unlikely. You never know when the last one is gonna be. Please wear intelligent footwear. Tonight the Odeon is offering a show we have hosted the past 3 years. This year, we are still available for the Monsters of Accordian… we just had to improvise a bit. I can’t recommend Jason enough as a performer. He is the best thing that ever came out of the Odeon. You come see for yourself. I’ll double your money back. He’s awesome. Daniel Ari doesn’t suck either. Aaron in amusing. Here’s the write up:

Seattle’s Jason Webley is a consummate performer. He appears like a back alley prophet in layers of baggy clothes, a trench coat and an old porkpie hat; he leaps onto stages, window ledges and bar tops, feverishly pumping the bellows of his accordion and stomping out the beat while roaring and whispering in his passionate, gravelly baritone. His music – a mix of gypsy, folk and punk – traverses age and social background, drawing grandparents, children, punks, drunks, and lovers into the fold. He likes to sing about death, carousing, and vegetables. He recently released a much-awaited new album, Only Just Beginning, and is fresh off the stalks of his Tomato Tour.

Daniel Ari, Poet of the Oompacalypse, welcomes you to his quirky, warm, and human world of left-field accordion anthems and articulate social observations. He is the author of the 21st Century’s answer to “Freebird,” the anthemic accordion ballad, “Misty-Eyed Lady,” as well as the serio-comic punk-rock political rant, “Grammarians R Pissed!.

Duckmandu (aka Aaron Seeman), accordionist, pianist, and old school punk, does an impressive Jello Biafra imitation, which he will treat you to tonight, as well as familiar songs of other genres that have never occurred to you to be performed on accordion.

Also on tonights lineup is Cyclecide bike rides. The dizzy toy and the ferris wheel (all pedal powered) will be in effect and ready to ride. Throw in a flame thrower or 2 and you’ve got a smashing event. Hell, we might even crush a few cars…..