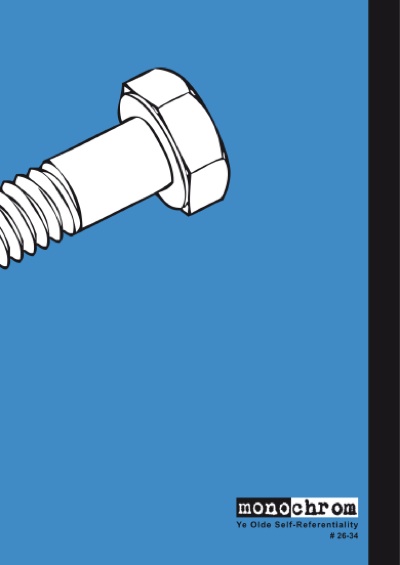 In March our prolific friends at monochrom released their latest book “monochrom #26-34, Ye Olde Self-Referentiality”. They are currently doing a book release tour with upcoming stops in Los Angeles on April 16th at Machine Project, San Francisco on April 21st at Noisebridge, New York City on April 27th at The Nuyorican Poets Cafe and in Munich on July 3rd at Department of Volxvergnuegen.

monochrom is a magazine object appearing in telephone book format, which is published by the art/tech group of the same name. monochrom came into being in the mid-1990s as a fanzine for cyberculture, science, theory, cultural studies and the archaeology of pop culture in everyday life.

Its collage format is reminiscent both of the early DIY fanzines of the punk and new wave underground and of the artist books of figures such as Dieter Roth, Martin Kippenberger and others.

With a great deal of forced discontinuity, a cohesive potpourri of digital and analog subversion is pressed between the covers of monochrom. Each issue is an unnostalgic amalgam of 125 years of Western counterculture cocked, aimed and ready to fire at the present. It is a Sears catalog of subjective and objective irreconcilability the Godzilla version of the conventional coffee table book.