“Mojave Phone Booth”, is an independent film by John Putch based on the legendary phone booth located in the middle of Mojave Desert.

In the middle of the Mojave desert, rests an abandoned phone booth, riddled with bullet holes, graffiti, its windows broken, but otherwise functioning. Its identity was born on the internet, and for years travellers would make the trek down a lonely dirt road and camp next to the booth, in the hopes that it might suddenly ring, and they could connect with a stranger (often from another country) on the other end of the line.

This is the story of four disparate people whose lives intersect with this mystical outpost. With themes of love, death, the mystery of the universe, and the phenomenon of inter-connectivity, Mojave Phone Booth pitches us deep into the lives and psyches of these working class people in Las Vegas. 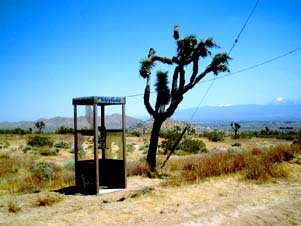 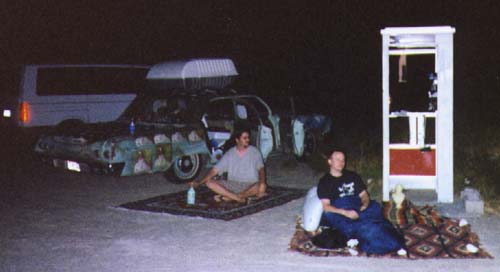 This film is based on the real Mojave Phone Booth, which was originally installed around 1960 and until it’s removal in 2000, was one of the most remote phone booths in the US. Our friends over at Deuce of Clubs created the original Mojave Phone Booth website and were so obsessed with the phone booth that they would often make trips there, staying for days on end. They posted the phone number on the website and would take calls from strangers around the world. It was their ongoing documentation of the phone booth that lead to worldwide interest in it, online and offline, including being the inspiration for the film. Back in 2005 Deuce of Clubs did a really great interview with “Mojave Phone Booth” director John Putch as he was finishing up work on the film.

Deuce of Clubs is currently working on a book about the Mojave Phone Booth, based on their experiences there and massive volume of documentation on their website.

Many other people have documented their trips out to the phone booth including Lara Hartley, Simbajak and Desert Tripper.

Here are the last people to visit the Mojave Desert Phone Booth.

A screening of “Mojave Phone Booth” is taking place this Sunday, February 18th at Victoria Theater in San Francisco as part of sf indiefest 2007.