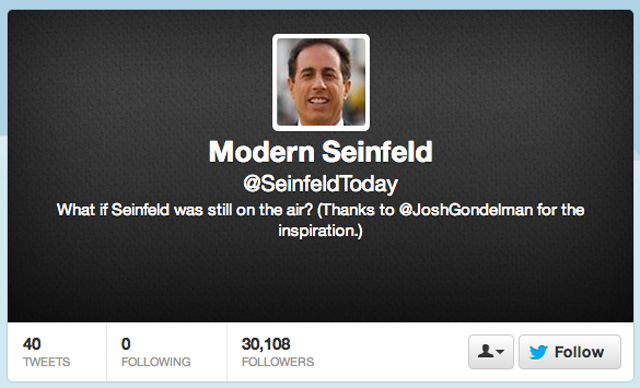 Modern Seinfeld asks “What if Seinfeld was still on the air?” and pitches potential modern day Seinfeld TV episode storylines in its Twitter feed, @SeinfeldToday. Many of the tweets are internet related and quite funny. The feed was inspired by (but not written by) Josh Gondelman.

Here are some examples:

Jerry breaks up with his girlfriend because she doesn’t like Shake Shack custard. Kramer goes to Williamsburg, hates it.

George tries to take a date to “Book Of Mormon.” Decides to buy tickets from a scalper. Takes her to all-male revue “Book Of More Men.”

Jerry joins Twitter only to find that a Jerry parody account has 50k followers. It’s run by Bania who will stop if Jerry buys him dinner.

Elaine has a bad waiter at a nice restaurant, her negative Yelp review goes viral, she gets banned. Kramer accidentally joins the Tea Party.

Modern Seinfeld Episode: Jerry breaks up with a woman who ignores his Facebook request. It was a different lady with the same name. Whoops!