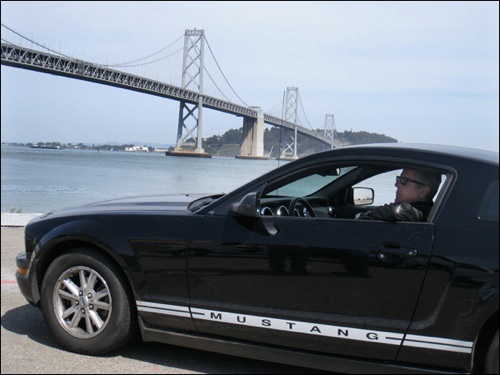 This week’s episode of the Travel Channel’s “No Reservations” brought Anthony Bourdain to San Francisco. We’re used to seeing him paddling a canoe up an Amazon tributary or eating a roast tongue out of an African warthog’s skull so it seemed a little weird to see him in our neighborhood, but a world-class city like San Francisco has a lot to offer including the infamous Cubana sandwich.

This $10 monster, “as big as Giada De Laurentiis’ head” serves two people for at least 48 hours. I stopped by the That’s It Market this Saturday afternoon, took one home, and discovered that it is all one could expect and more. Packed with ham, cheese, mayonnaise, chorizo, chicken, pickled peppers, sour cream, fried egg, milanesa, avocado, and garnished with hot dog slices it is a work of art that simultaneously appetizes and horrifies. Here’s a photo of the half that I couldn’t eat and saved for later, with a quarter on the left for scale.