The brilliant and surreal French filmmaker Michel Gondry has recently completed production on his next film “Be Kind Rewind”, staring Jack Black and Mos Def, which is due to be released on January 25, 2008.

Jerry (Jack Black) is a junkyard worker who attempts to sabotage a power plant he suspects of causing his headaches. But he inadvertently causes his brain to become magnetized, leading to the unintentional destruction of all the movies in his friend’s (Mos Def) store. In order to keep the store’s one loyal customer, an elderly lady with a tenuous grasp on reality, the pair re-create a long line of films including The Lion King, Rush Hour, Ghostbusters, When We Were Kings, Back to the Future, Driving Miss Daisy, and Robocop , putting themselves and their townspeople into it. They become the biggest stars in their neighborhood. 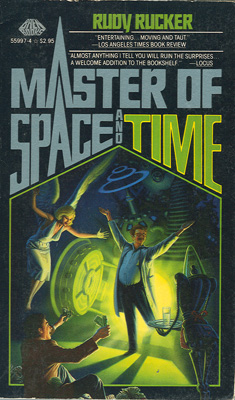 Michel is currently working on “Master of Space and Time”, based on the 1994 science fiction novel by Rudy Rucker, with a screenplay by Daniel Clowes.

The real world is unbearable to madcap inventor Harry Gerber, so he uses his genius to twist the laws of science and create his own tailor-made universe. Master of Space and Time combines high physics and high jinks, blurring the line between science and magic.