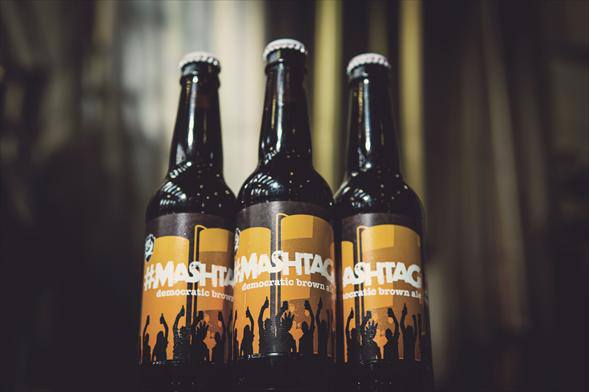 BrewDog Brewery has created #MashTag, a beer whose contents were voted on using Facebook, Twitter, and the BrewDog blog. Fans voted on the style, malt, alcohol percentage, hops, special flavor, label design, and even the name of the beer. The resulting beer is 7.5% American Brown Ale with New Zealand Hops aged with Hazelnuts and Oak chips. “We handed the keys to the brewery over to our fans,” BrewDog spokeswoman Sarah Warman told ABC News. “Every single element of that beer was decided by the public.”

Inspired by the passion, knowledge and enthusiasm of craft beer drinkers, we set out to create a truly democratic craft beer. We entrusted all the important decisions to our fans, customers and anyone who wanted to learn more about the craft brewing process and cast their vote. We gave up complete control of every single decision which shaped the final beer that the #MashTag project produced.