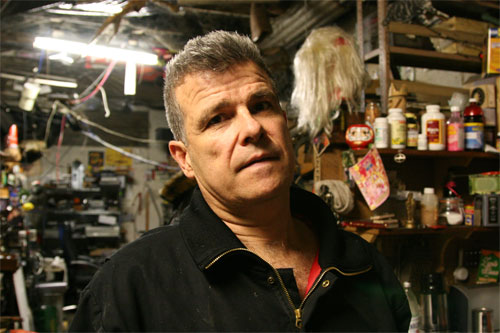 Speaking of Survival Research Labs, SRL founder and director Mark Pauline will be giving a talk this Wednesday, February 1st at UC Berkeley’s Kroeber Hall. Mark’s talk is part of the Art, Technology and Culture Colloquium Series on “Exploiting the Momentum of Self Righteousness”, in conjunction with UC Berkeley’s Center for New Media (CNM).

Long before there was Burning Man, there was Survival Research Laboratories, the legendary San Francisco-based performance art group founded by Mark Pauline in 1978. SRL, whose tagline is the not-exaggerated “Producing the most dangerous shows on Earth,” stages mechanical spectacles of sociopolitical satire in which high-tech weapons and robots menace each other amid noise, flames, and much destruction. The group calls itself an “organization of creative technicians dedicated to re-directing the techniques, tools, and tenets of industry, science, and the military away from their typical manifestations in practicality, product or warfare.”