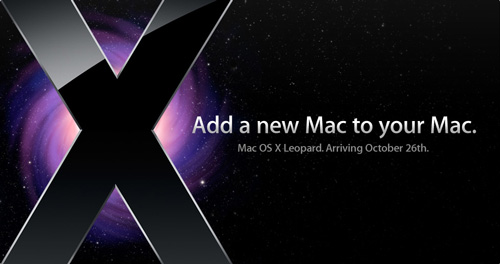 Apple has just announced that they will be releasing Leopard, the next version of Mac OS X (10.5), on October 26.

Apple today announced that Mac OS X Leopard will go on sale Friday, October 26 at 6:00 p.m. at Apple’s retail stores and Apple Authorized Resellers, and that Apple’s online store is now accepting pre-orders. Leopard is packed with more than 300 new features and introduces a brand new desktop with Stacks, a new way to easily access files from the Dock; a redesigned Finder that lets users quickly browse and share files between multiple Macs; Quick Look, a new way to instantly see files without opening an application; Spaces, an intuitive new feature used to create groups of applications and instantly switch between them; and Time Machine, an effortless way to automatically back up everything on a Mac.

In addition to the Apple Store, Daring Fireball has pointed out that Leopard can also be pre-ordered through Amazon. It appears that there is a 16% discount on the single user version ($109) and a 5% discount on the family pack ($189).