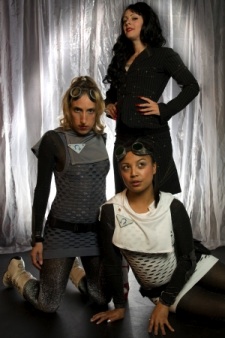 Knifebeatsfinger presents “Last Voyage of Omega”, an original sci-fi comedy about the afterlife written by Sean Kelly and directed by Helena Nolan, which takes place Fridays & Saturdays through August 9th at Stage Werx in San Francisco. Portions of the show will be influenced by feed back from people on Twitter.

LAST VOYAGE OF THE OMEGA is an original science-fiction comedy about a crew of hard-partying space travelers that mistakenly set their stasis chambers to three-billion years to avoid a nasty hangover. They end up stranded on planet Earth. Their shields are the magnetosphere. All like has evolved from their dead skin cells. They crew: Janet, Reyna and Prepiel enjoin a battle with an saucy and sassy incarnation of Cthulhu, Carlotta Catorce for the hearts and minds of the human race. Portions of the show will be influenced in advance by cell-phone users logged in to twitter.com.

Tickets are now on sale through Brown Paper Tickets.