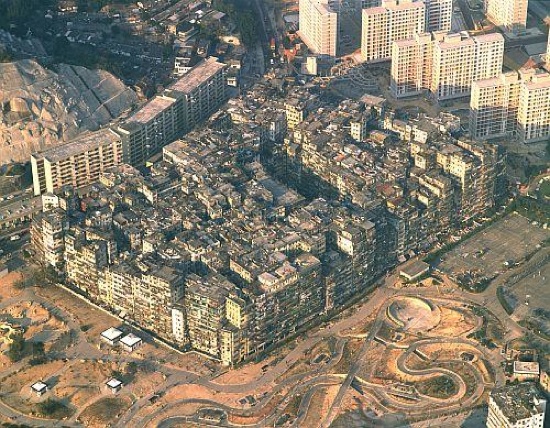 Before being dismantled in 1993, Kowloon Walled City was believed to contain the highest population density of humans anywhere on the planet. At only 6.5 acres (~0.01 square miles) in size, over 33,000 residents were thought to live within its walls. For comparison, San Francisco’s Moscone Center West, where Apple famously holds its WWDC keynotes every year, is only ~4.5 acres in size.

Kowloon Walled City had a complicated history. It was initially founded as a Chinese military fort during the mid 1600’s. The fort itself was located on Hong Kong Island and was ceded to the British in 1898. After World War II, squatters begin to occupy the fort and build new settlements. After failing to prevent further habitation and construction, both British and Chinese officials turned a blind eye to its existence. Eventually, sanitary conditions and subpar standards of living forced the British and Chinese governments to evict its residents and begin demolishing the city in 1993. Today, Kowloon Walled City Park occupies the original site of the city.

There exists a 1989 German documentary of the Walled City.

The images of the Walled City and its seemingly random and haphazard construction remind me of the haunting photos of Battleship Island, which we’ve previously written about.