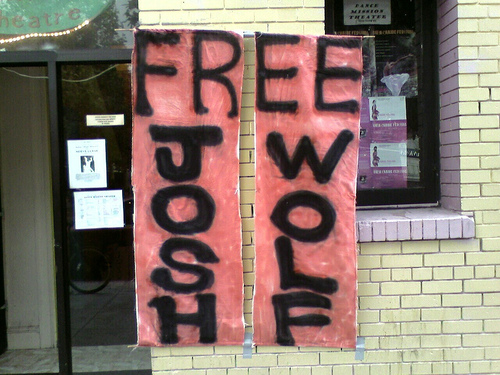 Josh Wolf, the video blogger who was arrested last month, has just been granted bail by the 9th Circuit Court of Appeals. Here are updates from the San Francisco Chronicle and Jackson West.

There will be a press conference today at 1pm at the U.S. Court of Appeals for the 9th Circuit Building in San Francisco.

Here is the press release from the Josh Wolf Legal Support Wiki:

SAN FRANCISCO â€“ The Ninth Circuit Court of Appeals granted bail today to Josh Wolf â€“ the independent journalist and blogger who was jailed August 1st for refusing to turn over video footage to a federal grand jury.

Since Wolfâ€™s jailing a number of organizations besides the National Lawyers Guild have voiced support for Wolf and condemnation of the Federal Government. This month the Society For Professional Journalists made a donation of $30,000 to his defense. The ACLU and the Reporters Committee for Freedom of the Press have both filed amicus curiae on behalf of Wolf. The San Francisco Board of Supervisors, led by Ross Mirkarimi and Tom Ammiano, also adopted a resolution this month urging the passage of a Federal Shield Law and condemning the federal governmentâ€™s actions in the Wolf case. The resolution charges that the grand jury is an â€œattempt to circumvent the local judicial system,â€ since the crime being investigated involves an alleged attack on a San Francisco police car.

â€œThis provides some vindication and we are cautiously optimistic about what the Ninth Circuit will ultimately decide,â€ said Carlos Villarreal, Executive Director of the National Lawyers Guild San Francisco Bay Area. â€œWe are hopeful that the justices are going to consider the importance of a free and independent media, especially when journalists are covering free speech activities.â€

Josh Wolf was ordered in contempt by Federal Judge William Alsup on August 1st. The US Attorneyâ€™s Office, led by Assistant US Attorney Jeffrey Finigan, wants Wolf to testify before a federal grand jury and hand over a video tape of a protest that occurred in San Franciscoâ€™s Mission District last July.