On a 2009 episode the PBS TV series California’s Gold with Huell Howser, watch as Joe Rinaudo of Rinaudo Reproductions plays his most prized possession, a 1926 Fotoplayer. The fotoplayer is a large machine that was built to play music and create sound effects for silent movies and could be operated without a musician with the use of player piano rolls.

The fotoplayer used a fascinating combination of piano, organ pipes, drums, and various sound effects designed to narrate the action of any silent film. Pedals, levers, switches, buttons, and pull cords were all used to turn on the xylophone, beat a drum, ring a bell, create the sound of thunder, or chirp like a bird.

When sound films came into being in the late 1920’s, the fotoplayer became passé.
Of the thousands of American fotoplayers made during their heyday, sadly less than 50 survive, and of those only 12 are known to be in playing condition. 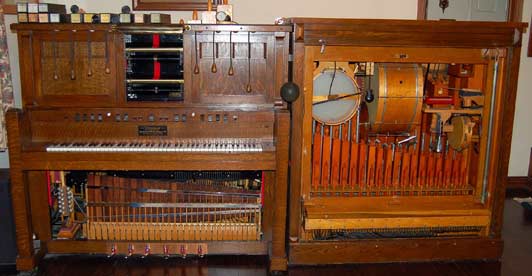