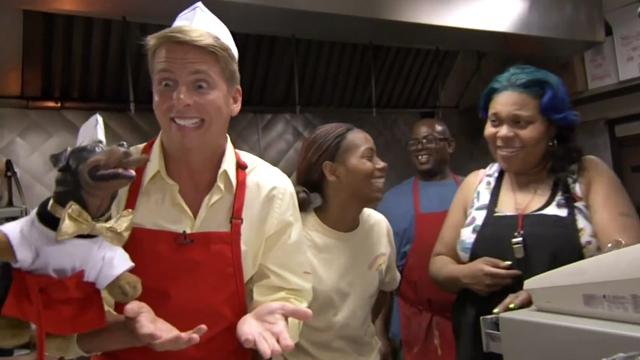 Adult Swim has recently announced that they are planning to bring together actor Jack McBrayer and Triumph the Insult Comic Dog for a new, currently untitled, buddy comedy series that would be added to their 2014-2015 programming schedule. According to The Hollywood Reporter, “unlike most everything in the Adult Swim live-action roster, it will air as a half-hour.”

UNTITLED TRIUMPH/MCBRAYER SITCOM – Jack (McBrayer) is a former child star of a popular Lassie-type series that ran in the ’80s and ’90s. After it was cancelled, his crude but beloved co-star (Triumph) spiraled into decadence and got Jack in trouble with him. 15 years later, with Jack finally self-sufficient, happy, and away from show business, Triumph finds his way back into Jack’s life. This new half-hour live-action comedy series is created by Robert Smigel (SNL, TV Funhouse, Conan), Michael Koman (Eagleheart, Nathan For You) and David Feldman (Real Time, Dennis Miller Live), starring Emmy®-nominee Jack McBrayer (30 Rock) and Triumph the Insult Comic Dog (Conan), produced by Poochie Doochie Productions and Universal Television.

Here is a video from 2012 of Jack McBrayer and Triumph visiting Chicago’s Weiner’s Circle on Conan: