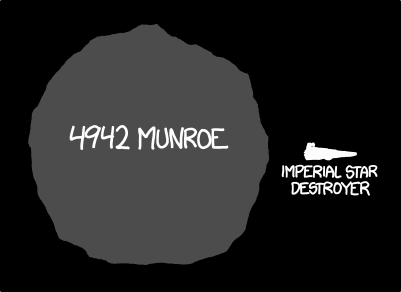 The International Astronomical Union has named an asteroid after xkcd author Randall Munroe. xkcd readers Lewis Hulbert and Jordan Zhu submitted Munroe’s name for asteroid (4942) 1987 DU6, which is now known as 4942 Munroe. In a blog post, Munroe thanks his readers and shares more information about the asteroid:

The first thing I did was try to figure out whether 4942 Munroe was big enough to pose a threat to Earth. I was excited to learn that, based on its albedo (brightness), it’s probably about 6-10 kilometers in diameter. That’s comparable in size to the one that killed the dinosaurs—definitely big enough to cause a mass extinction!

Unfortunately Fortunately, it’s in a fairly stable circular orbit between Mars and Jupiter, so it’s unlikely to hit the Earth any time soon.

4942 Munroe (!!!) is large enough that it would have noticeable gravity, although not much. If you were walking on the surface and you tripped and fell, it’d take you a minute to hit the ground. You could get into orbit around it by traveling at jogging speed, and might even escape its gravity entirely with a good jump.