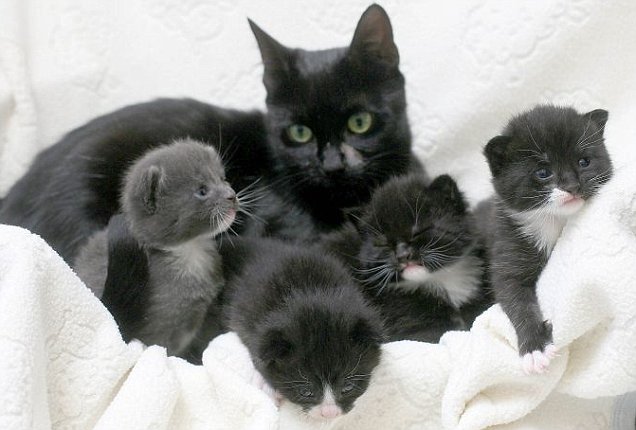 An injured mother cat, named Jolie, led Inspector Jon Knight from England’s animal rescue society, Royal Society for the Prevention of Cruelty to Animals, to her four dehydrated kittens in a local barn. According to the story, Jolie had been pregnant when she was thrown out of a moving car, found and fed by a local citizen, captured two weeks later and after being rescued miraculously gave the shelter vocal cues on how to find her four ailing kittens.

I began to follow her and she took me through the rear garden, across a ploughed field and into a farmyard. All the time she was calling me and waiting for me to follow.

She then took me into an old farm machinery barn and led me to behind a stack of old wood and there were her four kittens.

There is absolutely no way I would have found these kittens without this cat’s help. She was a huge distance away from the garden she had first been found in, and was clearly doing all she could to lead me to her kittens.

In my 15 years as an inspector I have never had this happen before and I was quite shocked by it all. Jolie had been through an awful lot, but she showed real maternal instinct and determination, she really is a remarkable cat.

All animals are doing fine and are being nurtured at the Block Fen Animal Centre in Wimblington, England.