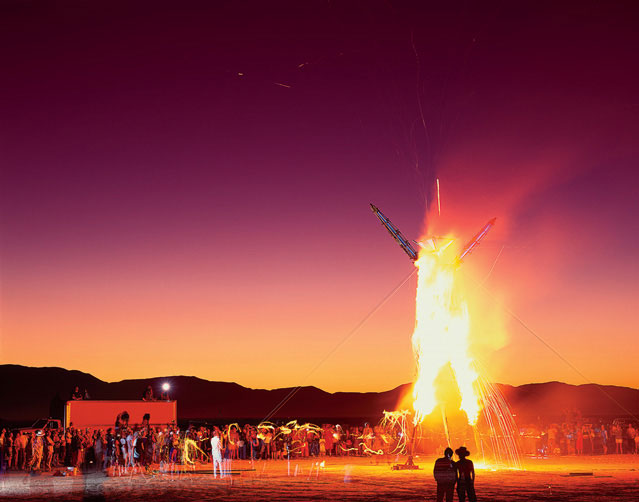 For Outside magazine’s October 2012 issue, Brad Wieners has authored the article Hot Mess, an oral history of Burning Man where he “talks to founders and fans about how the party got started—and the death, mayhem, and power struggles that almost shut it down.” The article quotes people closely associated with Burning Man through the years including John Law, Stuart Mangrum, Jerry James, Larry Harvey, Flash and many more.

…Burning Man is partly the story of a half-dozen eccentrics—an unemployed landscaper (Larry Harvey), an art model (Crimson Rose), a struggling photographer (Will Roger Peterson), a dot-com PR gal (Marian Goodell), an aerobics instructor (Harley Dubois), and a signmaker (Michael Mikel)—who made good. Less charitably, it’s the tale of a group of slackers who grabbed hold of the one thing that brought them notice—and, eventually, a paycheck—and have ruthlessly ridden it for all it’s worth. The truth contains elements of both, of course, but one thing’s for sure: it’s never boring.

Brad Wieners is a former senior editor at Outside and currently the executive editor of Bloomberg Businessweek.