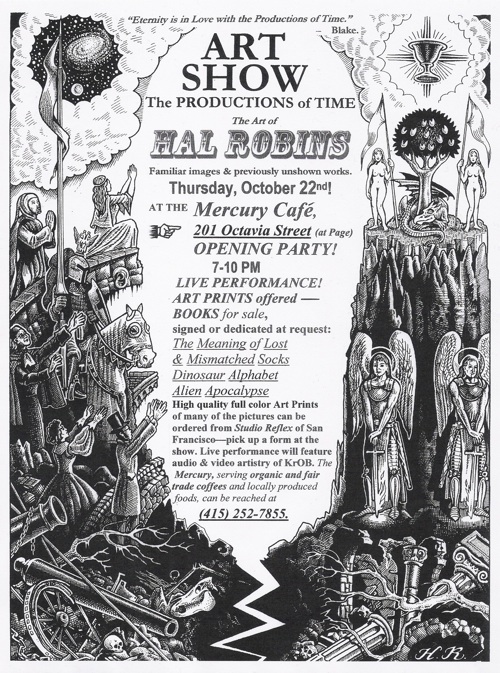 Our good friend and amazing artist Hal Robins, of the Ask Dr. Hal Show, is having a solo art show “The Productions of Time” at the Mercury Cafe in San Francisco. The opening party for the show is this Thursday, October 22nd from 7-10pm.

The show comprises a number of illustrations, pages of comic book work and previously un-shown works, all for sale. In addition, the show intends to provide a limited number of “Dr. Hal’s” books for sale at the opening:

The Meaning of Lost and Mismatched Socks (which is becoming quite a rarity– Random House is out of them), Dinosaur Alphabet and Alien Apocalypse 2006, including autographed and dedicated copies.

This may, in the current state of publishing, be the last, best chance to get some of these.

Affordable Art Prints of many of the pictures can be ordered from Studio Reflex of San Francisco– forms will be available at the opening and for the duration of the show.

There will also be a live performance by “Dr. Hal” ably assisted by KrOB’s visual and auditory magic!

The Mercury, serving organic and fair trade coffees and locally produced foods, can be reached at (415) 252-7855.