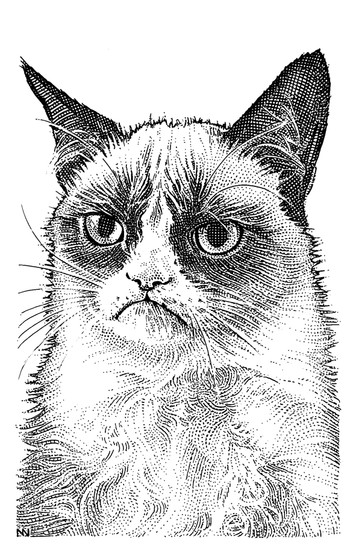 Deadline Hollywood is reporting that Grumpy Cat’s manager Ben Lashes and her rep Al Hassas have cut a movie deal with Todd Garner and Sean Robins of Broken Road Productions “to produce and assemble a package for a Garfield-like feature film with the famous frowning feline at the center.” Lashes was featured in The Wall Street Journal, alongside a stipple portrait of Grumpy Cat, where he discusses the other deals he’s helped make for her including a line of Grumpy Cat coffee-in-cans and bottled beverages and a forthcoming book titled, Grumpy Cat: A Grumpy Book: Disgruntled Tips and Activities Designed to Put a Frown on Your Face. Grumpy Cat was recently awarded the 2013 Webby Award for Meme of the Year.

image and video via The Wall Street Journal