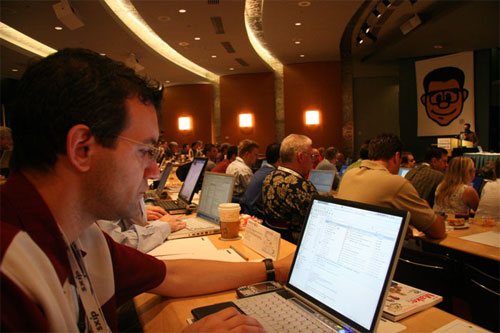 Speaking of conferences, Gnomedex 6.0, Lockergnome’s annual blogging and web technology event, takes place this summer from June 29th through July 1st in Seattle. According to Gnomedex co-organizer Chris Pirillo, by the end of January, the event was already 1/3 sold out. If you are planning on attending, you’ll need to register soon. Here’s my wrap-up and photos from Gnomedex 5.0.

This the press release that they refused to release a month ago:

Seattle, WA (PRWEB via PR Web Direct) February 1, 2006 — For the first time in recorded history, a leading technology conference decides to forego the issuing of a press release to drum up support and interest. Gnomedex is heading into its sixth year of bringing together technologists, entrepreneurs, thought leaders, venture capitalists, and other random buzzwords.

“This year’s conference has sold one-third of its available seats since opening registration a mere week ago,” says Chris Pirillo, Gnomedex host. “We don’t need to issue a press release.” Despite having not yet unveiled speakers or sponsors, the conference is well on its way to being sold out for the second year in a row.

The Gnomedex event mashes up social networking with an AJAX-powered open API wiki and tags with feeds – including podcasts on the user generated long-tail for Ruby on Rails. Are you paying attention yet? Every attendee will be blogging Gnomedex live, starting a blog at the conference, or learning how to spell “blog” for the first time.

“Please don’t quote me on this,” asks Ponzi Indharasophang, Gnomedex coordinator. “I hate press releases. You probably made up this quote in the first place. These things are a gigantic waste of time and I have to get back to lining up sponsors for Gnomedex.” In years past, official partners have included Microsoft, Yahoo!, Google, and PayPal.

The only public details include the location, venue, and dates: June 29th – July 1st, 2006 in Seattle, Washington at the Bell Harbor International Conference Center. Tickets are $499 apiece, which includes meals, wireless Internet access, and a power outlet.