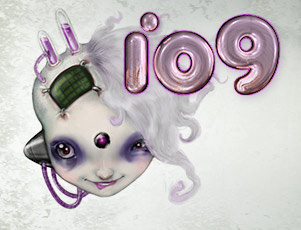 Gawker Media has just launched io9, a new science fiction blog edited by Annalee Newitz and senior associate editor Charlie Jane Anders. It’s off to an excellent start with some great posts on a variety of sci-fi topics.

io9s were marketed as cheap time machines in the 2070s. They were actually just low-grade input/output devices for the brain that tuned tachyon waves and gave users vivid images of possible futures. The things were so addictive, and drove so many people insane, that io9s were eventually outlawed. Today the word is just slang. io9ers are the early implanters who obsessively upgrade themselves with beta tech. People who tweak out on buggy brainware are sometimes said to have “gone io9.” Science fiction writer Ken MacLeod has another term for io9ers. He calls them rapture fuckers.

Congratulations guys! This one will be near the top of my RSS subscriptions.