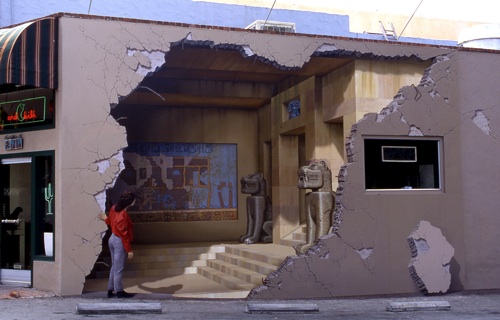 Santa Cruz artist John Pugh has created a fantastic series of public trompe l’oeil murals that give the illusion of being three dimensional.

I have found that the “language” of life-size illusions allow me to communicate with a very large audience. It seems almost universal that people take delight in being visually tricked. Once captivated by the illusion, the viewer is lured to cross an artistic threshold and thus seduced into exploring the concept of the piece. I have also found that by creating architectural illusion that integrates with the existing environment both optically and aesthetically, the art transcends the “separateness” that public art sometimes produces.