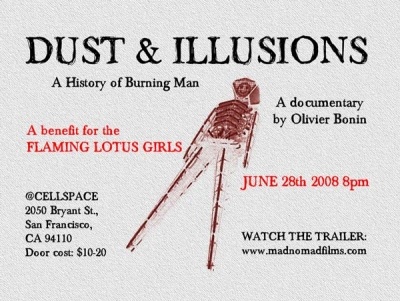 The new documentary “Dust And Illusions” by Olivier Bonin, featuring an in-depth look a the history of Burning Man, is having a special preview screening at CELLspace in San Francisco this Saturday, June 28th. The event is a benefit for The Flaming Lotus Girls to help them raise money for their Burning Man 2008 fire-art project Mutopia.

Once a year, on a vast Nevada lake bed surrounded by mountains, the Burning Man festival brings together tens of thousands of people who are attracted by the festival’s promise of seven days of “decommodification,” “community,” “artwork,” and “revelry.” But increasingly, many question whether Burning Man’s mainstream appeal threatens—or even upends—the festival’s utopian vision. Through a series of in-depth interviews of the festival’s founders, organizers, and participants, DUST AND ILLUSIONS traces the festival’s history, while examining whether the festival is a victim of its own success.