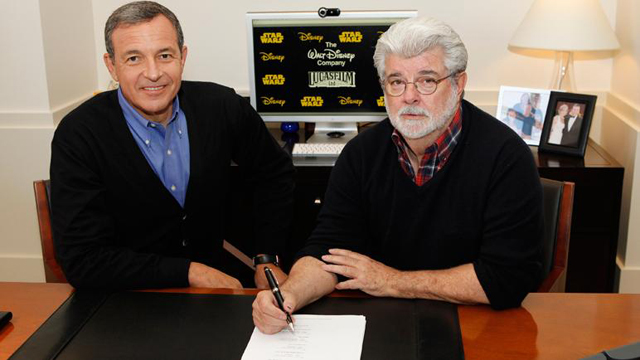 In an investor conference call on October 30, 2012, The Walt Disney Company has agreed to acquire Lucasfilm Ltd. and its creative portfolio of content, including the Star Wars franchise and its operating businesses (Industrial Light & Magic and Skywalker Sound). In the stock and cash transaction for 4.05 billion dollars, they will also continue the Star Wars franchise and already have plans to release an Episode 7 film in 2015.

“Lucasfilm reflects the extraordinary passion, vision, and storytelling of its founder, George Lucas,” said Robert A. Iger, Chairman and Chief Executive Officer of The Walt Disney Company. “This transaction combines a world-class portfolio of content including Star Wars, one of the greatest family entertainment franchises of all time, with Disney’s unique and unparalleled creativity across multiple platforms, businesses, and markets to generate sustained growth and drive significant long-term value.”

Kathleen Kennedy, current Co-Chairman of Lucasfilm, will become President of Lucasfilm, reporting to Walt Disney Studios Chairman Alan Horn. Additionally she will serve as the brand manager for Star Wars, working directly with Disney’s global lines of business to build, further integrate, and maximize the value of this global franchise. Ms. Kennedy will serve as executive producer on new Star Wars feature films, with George Lucas serving as creative consultant. Star Wars Episode 7 is targeted for release in 2015, with more feature films expected to continue the Star Wars saga and grow the franchise well into the future.

images via The Walt Disney Company and Lucasfilm Ltd.