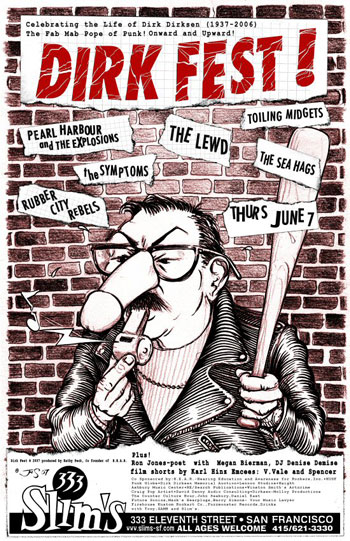 DirkFest, a two day celebration of the life of the legendary San Francisco punk rock promoter Dirk Dirksen, who passed away last November, takes place at Slim’s on Thursday, June 7th and at the Great American Music Hall on Friday, June 8th.

DirkFest tribute to “Pope of Punk” Dirk Dirksen (1937-2006) to be held in San Francisco on June 8 at Great American Music Hall, and at Slim’s June 7. Last November, Dirk Dirksen, the punk rock impresario who ran San Francisco’s Mabuhay Gardens “Fab Mab” nightclub and later the On Broadway during its heyday in the ’70s, died in his sleep with a smile on his face at the age of 69. Kathy Peck of H.E.A.R. and The Contractions and Dirk’s friends and colleagues will host “Dirk Fest” at the Great American Music Hall June 8th in San Francisco and June 7th at Slim’s to pay tribute to Dirk and help raise funds to pay off his final expenses and for the preservation of his rare archives of video taped performances, photos, posters, and other punk memorabilia. All punks and interested persons are invited to leave a note on this site and read the notes that others have left. And make a donation if you can. 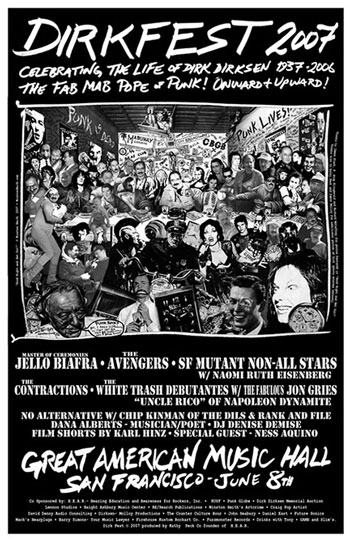