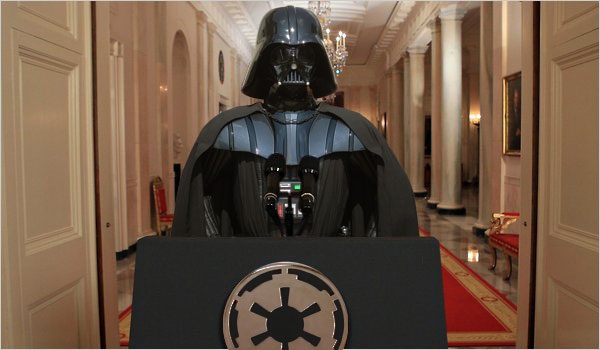 The Galactic Empire Times is reporting that Darth Vader has announced that Obi-Wan Kenobi has been killed.

Obi-Wan Kenobi, the mastermind of some of the most devastating attacks on the Galactic Empire and the most hunted man in the galaxy, was killed in a firefight with Imperial forces near Alderaan, Darth Vader announced on Sunday.

In a late-night appearance in the East Room of the Imperial Palace, Lord Vader declared that “justice has been done” as he disclosed that agents of the Imperial Army and stormtroopers of the 501st Legion had finally cornered Kenobi, one of the leaders of the Jedi rebellion, who had eluded the Empire for nearly two decades. Imperial officials said Kenobi resisted and was cut down by Lord Vader’s own lightsaber. He was later dumped out of an airlock.