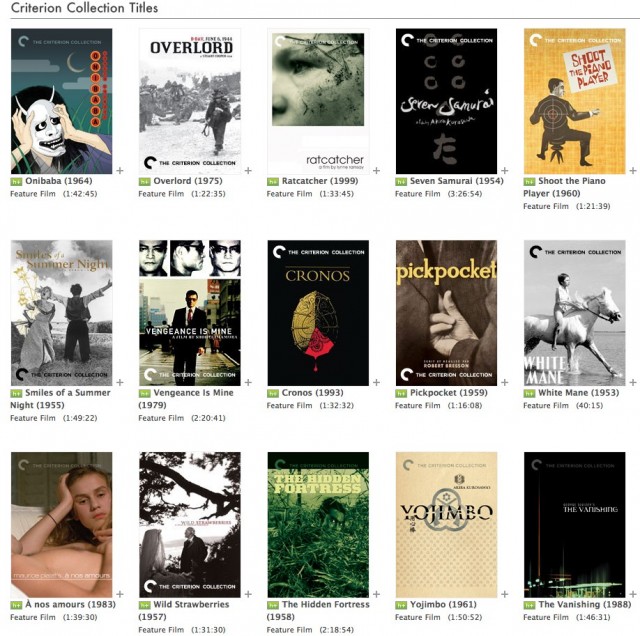 Online video site Hulu has begun offering hundreds of movies from the well-curated set of international film treasures known as The Criterion Collection via their Hulu Plus service.

[While] we still see our core business as producing the world’s best DVD and Blu-ray versions of the world’s best films, this new venture with Hulu represents a huge expansion of our reach. Not only will Hulu users have access to the largest digital archive of Criterion movies for the first time, Hulu Plus subscribers will now be able to stream our films (and yes, before long, many of our supplements too!) on a wide array of devices, including iPhones, iPads, PlayStations, and Internet-connected television sets.

Initially launching with 150 films, there are now well over 200 Criterion movies available on Hulu Plus. These include films from all over the world. And ultimately Hulu has rights to stream online over 800 titles from the collection. While the films will primarily be available via the premium Hulu Plus service ($7.99/month), regular Hulu users will have some access to Criterion films.

For Criterion, thanks to our advertising partners, Hulu Plus subscribers will be able to watch the Criterion Collection free of interruption. (Any ads will play up front.) For those who don’t have a Hulu Plus subscription, each month we’ll still rotate a few Criterion titles through Hulu with our normal periodic ad breaks.

Founded in 1984, The Criterion Collection is dedicated to making “important classic and contemporary films” available for film fans at home. Initially they produced exclusively Laserdiscs, but now distribute films on DVD and Blu-Ray. Criterion has always been selective about the films they chose to release, including the works of recognized masters filmmakers from all ages and nations like Wim Wenders, Jacques Tati, Charlie Chaplin, and Akira Kurosawa.

Criterion has been influential in their film selections, but also in how they package and present the films they choose. Their use of letter-boxing, commentary tracks, quality of film restoration, and bonus features have been innovative and often set new standards for the home DVD market.

The Criterion website itself is a cinematic treasure trove, with interviews and other real film-nerd fodder stuff, like posts about Bogdanovich on John Cassavetes, spotlights on Italian Neorealism, etc. Criterion films are also available via Netflix (including 140+ titles on Netflix Instant) and they have a great YouTube channel with trailers and other special clips, like this gorgeous promo for Red Desert by Michelangelo Antonioni.