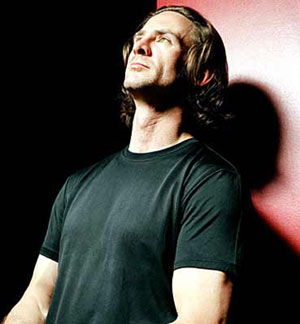 Chuck Palahniuk is in the Bay Area this week to promote his new book “Haunted”. We first met Chuck back in 1996 during the Portland Santacon event. This was before “Fight Club”, his most popular book, came out and at the time he was writing an article for Harpers about the whole Santarchy thing. It turns out that Chuck, who lives in Portland, had been hanging out with the Portland Cacophony Society (our hosts for that year’s Santacon). When “Fight Club” the book and later the film came out, there were obvious tributes to The Cacophony Society. Later on in Fugitives And Refugees, his book about Portland, Chuck mentions the Portland Santacon event and a photo from it was even used as the book’s cover. Because of this, Chuck has had a close association with The Cacophony Society and Santarchy. Sometimes when he does a book reading, members of the local Cacophony lodge will show up and try to “prank” him. Gary Singh wrote about all of this yesterday in “Chuck Amuck”, a piece he did for the Metro.

Chuck is scheduled to appear at the following Bay Area bookstores: