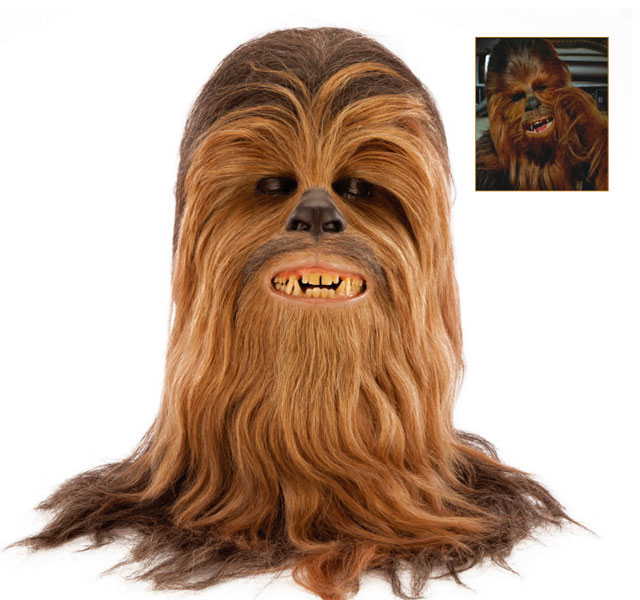 At the recent Treasures from the Hollywood Vaults movie memorabilia auction, the costumed headpiece of Chewbacca, which was used in the original Star Wars trilogy, sold for $172,000. Worn by actor Peter Mayhew, this incredible piece of movie history had only been estimated to sell between $60,000 to $80,000. According to the auction catalog’s description (pdf), make-up artist Stuart Freeborn created lifecasts of Mayhew to construct the headpiece and is “finest screen-correct Chewbacca costume head from the Star Wars trilogy known to exist.”

The auction featured rare items from the Dreier Collection and was hosted by Joe Maddalena’s Profiles in History auction house in Calabasas Hills, California in late July 2012.

NY Daily News quotes Maddalena as saying, “It’s a good day for the Wookiee people on Kashyyyk, but seriously, iconic Hollywood props and costumes are finding their deserved places among pop culture collectors around the world.” 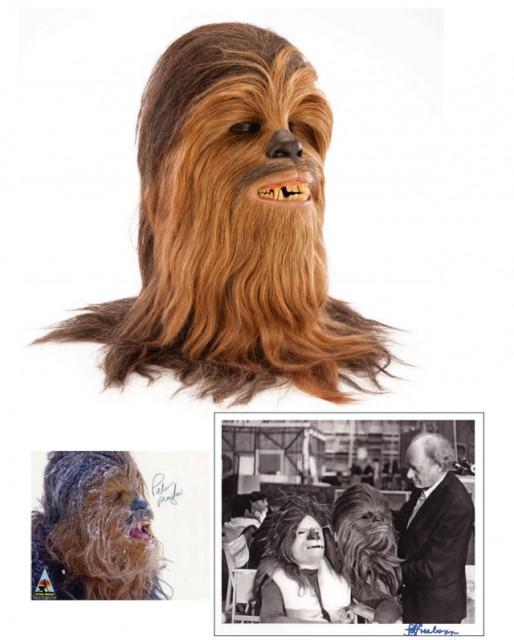 The most loveable and loyal character throughout the entire Star Wars saga is Chewbacca, the Wookiee who owed a life debt to Han Solo and allied himself with his nomadic friend/smuggler in Star Wars. “Chewie” soon became the most consistent and dependable collaborator in the Rebel Alliance. Portrayed by the 7 ft. 3 in. British actor Peter Mayhew, Chewbacca’s stature and distinctive mane of long brown hair made him an instant celebrity character, and his heroic rescues throughout the series have given him a special place in the hearts of Star Wars fans the world over.

Offered here is the full costume headpiece of Chewbacca from the original trilogy in private hands. It consists of a screen-used cowl hairpiece (which encompasses the entire head), and a period-made Stuart Freeborn facial appliance. Judging by the construction of the cowl, it was also most likely used in more than one of the original films of the trilogy. The facial appliance is attached to the cowl and mounted on a period Stuart Freeborn foam Chewbacca head so that the display retains its screen-used appearance. The foam head was originally made by Freeborn to support the facial appliances while they were prepared for filming on the set. The front jaw, mouth, nose, teeth and tongue that comprise the facial appliance are original period pieces made for the production by Stuart Freeborn, and have been reassembled for the display. The eyes are actual casts of Peter Mayhew’s closed eyes, taken directly from the lifecast that Freeborn made for the trilogy.

With these pieces, the facial appliance has been professionally finished with original period “Wookiee” hair acquired for Return of the Jedi by Freeborn in 1981. Of particular note, this Wookiee hair was personally marked by Freeborn as “eyebrow”, “lower eye”, “cheeks”, etc. so that it could be perfectly placed on Mayhew for continuity during his make-up sittings – and has now been seamlessly mated with the original costume pieces… Included are signed photographs by Stuart Freeborn and Peter Mayhew.

images via Profiles in History