Augmented Reality Scratching is an utterly awesome little hack that Todd Vanderlin came up with. In short, Augmented Reality is a technique where computer graphic is transposed onto real footage in real time. One way of doing this is to use markers that the computer will track on a coordinate system.

So by figuring out the velocity of the records rotation and applying it to the payback of the audio you can scratch. There is some digital noise that needs to bee worked out, but sounds pretty good. Its still really hard to scratch, it takes some practice but is super fun. The next step is to figure out some nice triggers for different modes. I like the idea of not needing a turntable but the actual spinning of the record helps with the scratching and playback. I made a couple modes, one where the record is paused and you can just scratch through the song. The other looks for zero velocity for x time and then continues on with the song. If there is velocity you then are scratching and the audio is affected. I think that this project has some legs can’t wait to play more. 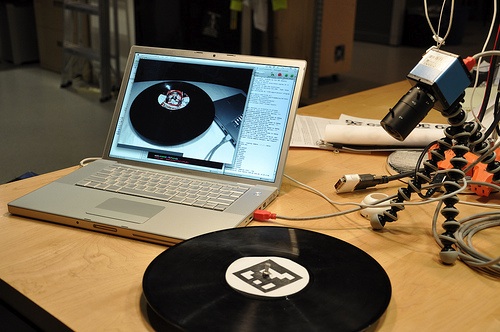