Houston, Texas artists Dan Havel and Dean Ruck (aka Havel Ruck Projects) have done a series of projects that feature artistically modified houses. The startling effects they create look like CGI from a summer blockbuster move but are actually constructed with wood and building materials–sometimes from the same buildings they are modifying. And unlike their cinematic equivalent, Havel and Ruck’s creations exist in the world, for a bit anyway, so you can actually touch them.

“Inversion” was a short-lived project that made a big impression in 2005 when it went up. It features the facade of an actual house with a large hole in the middle that seems to be sucking the rest of the structure into it. This video features the artists talking about the project which was commissioned by Art League Houston. Inversion was on a main thoroughfare, so a lot of people encountered it with little explanation as they drove by it every day. 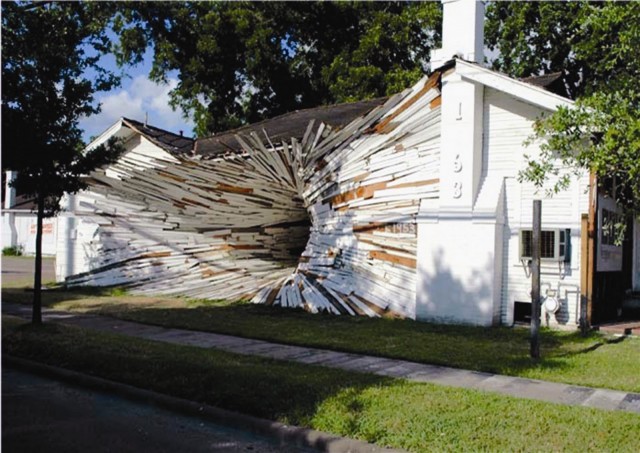 Fifth Ward Jam is a more recent project enabled by a grant from the Houston Arts Alliance and the support of the Fifth Ward Community Redevelopment Corporation. This one is actually a functional stage in a mini-park as well as being a fantastic sculptural work. Fifth Ward Jam is still up (it even has a Yelp page).