At Where 2.0 today in Santa Clara researchers Alasdair Allan and Pete Warden announced today that Apple’s iOS 4, which runs on the iPhone and iPad, has been secretly saving the device user’s location data since the software’s release a year ago. The researchers discuss their findings in this video discussion via O’Reilly Media.

All iPhones appear to log your location to a file called “consolidated.db.” This contains latitude-longitude coordinates along with a timestamp. The coordinates aren’t always exact, but they are pretty detailed. There can be tens of thousands of data points in this file, and it appears the collection started with iOS 4, so there’s typically around a year’s worth of information at this point. 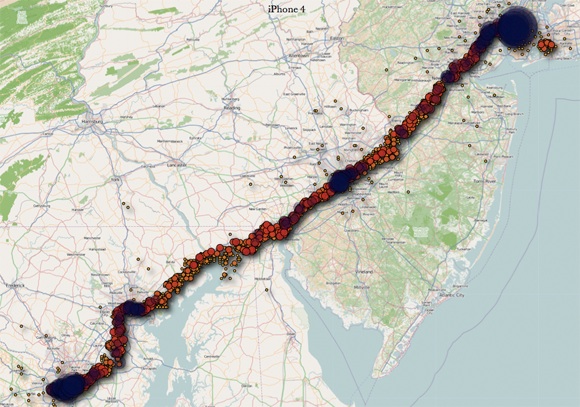 The location data is saved on the device and is synched to the user’s computer as well. No word yet from Apple on why this data is being collected.

Allan and Warden have released iPhoneTracker, an application that will generate a map of an iOS 4 device user’s movements by accessing the location data on the user’s computer. The researchers recommend iOS 4 device users check the “Encrypt iPhone Backup” box under “Options” in iTunes to provide at least some measure of protection for this data.