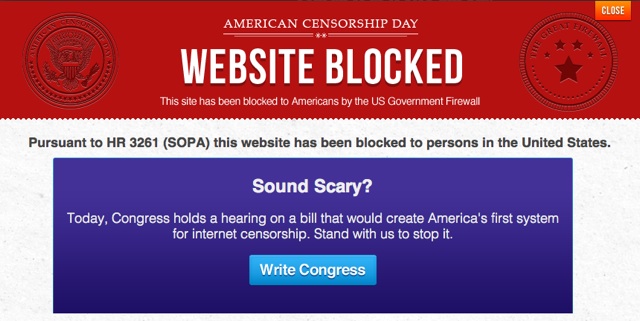 The US Congress is currently holding hearings on the first American Internet censorship system. Help spread the word to stop this bill and let the Congress know that it is not alright to censor the internet.

PROTECT-IP is a bill that has been introduced in the Senate and the House and is moving quickly through Congress. It gives the government and corporations the ability to censor the net, in the name of protecting “creativity”. The law would let the government or corporations censor entire sites– they just have to convince a judge that the site is “dedicated to copyright infringement.”

The government has already wrongly shut down sites without any recourse to the site owner. Under this bill, sharing a video with anything copyrighted in it, or what sites like Youtube and Twitter do, would be considered illegal behavior according to this bill.

According to the Congressional Budget Office, this bill would cost us $47 million tax dollars a year — that’s for a fix that won’t work, disrupts the internet, stifles innovation, shuts out diverse voices, and censors the internet. This bill is bad for creativity and does not protect your rights.