All In This Tea, a documentary by Les Blank and Gina Leibrecht about American tea importer David Lee Hoffman (founder of Silk Road Teas) and his travels to China, opens in the Bay Area starting this Sunday, December 9th with a preview event at the Christopher B. Smith Rafael Film Center.

This feature documentary by Les Blank and Gina Leibrecht follows the American tea importer, David Lee Hoffman, to some of the most remote regions of China in search of the world’s finest handmade teas. This craft can not be learned from a book, but is handed down through generations of tea makers. A passionate supporter of sustainable, environmentally sound practices, Hoffman is a champion of the independent tea farmers who adhere to this ancient, handcrafted tradition. He revels in the medicinal, meditative, and transformative power of tea and strives to bring this cultural gem to the world market. Traveling to regions where no Westerners have ever been, this film offers a glimpse of daily life in China. . .and you’ll never drink a cup of tea in the same way again 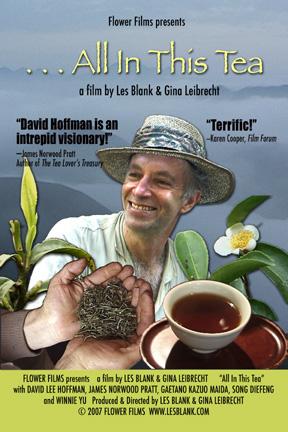