Dissatisfied by the official poster designs for the upcoming X-Men: First Class film, the blog Super Punch announced a contest to redesign them. Joe D! answered the call, but his entry to the contest veered outside the official guidelines, in that he didn’t design a poster but instead produced his own version of the title sequence for the yet to be released film featuring stylized animation and vintage news footage.

Set during the midst of the Cuba Missile Crisis, X-Men: First Class tells the story of the first team coming together, before they would become the heroes and villains we know from the original X-Men Trilogy.

You can see Clyde Bailey‘s winning design below and all the contest entries on Super Punch. The film is out June 3rd. 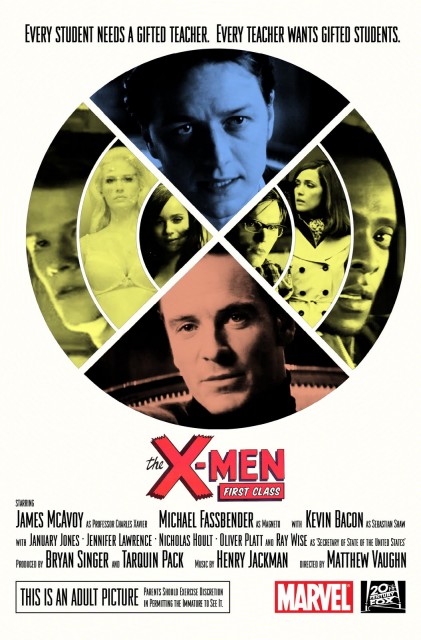 There’s a great recent trend (that we love) of wishful-designing, where contemporary designers revisit classic works of the past and reimagine or remarket them. We love this trend, and we’ve covered lots of examples. For instance imagining classic comic books as vintage paperbacks, or Warren Ellis‘ call to create a poster for Iron Man as directed by Kubrick. Others have imagined different casts and directors and posters famous films in alternative universes. FRO gets special recognition for not only creating posters for four of the greatest films never made and many , but even business cards from fictional companies from literature, film and television. Some, like the great Star Wars series that Mondo has released by artists like Tyler Stout and Olly Moss are officially sanctioned and coordinated with the original film’s producers, while other times a designer just doesn’t like the the poster for an upcoming blockbuster and decides to make his own.

An example of the type of movie titles that may have inspired this animation, is 1963’s Charade, below: