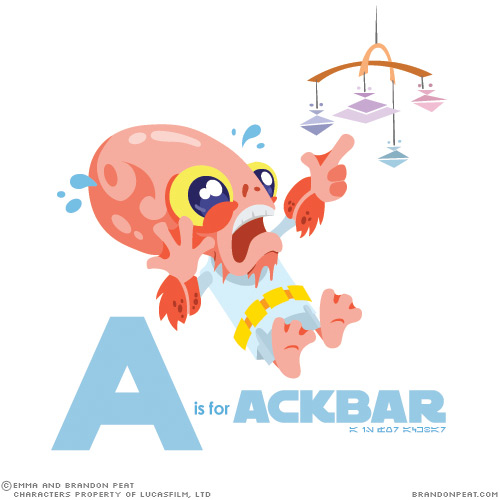 “A Is For Ackbar” is a series of illustrations by Emma and Brandon Peat featuring kid themed Star Wars characters that they created as a fun way to decorate their baby boy’s room.

When my wife Emma and I found out we were pregnant with our first child, Tycho, we began thinking of fun ways to decorate a baby boy’s room. Since we live in an apartment and aren’t allowed to paint the walls, that meant posters or prints of some kind. And, being artists, we naturally wanted to create those prints ourselves. In the end, we decided to illustrate an alphabet of characters from one of our favorite franchises – Star Wars.

Selecting each letter was a lengthy process. The characters who made the cut are primarily from the Original Trilogy (no Prequel characters here!), with a few from the Expanded Universe of books, comics, and video games. We also tried to keep the illustrations as non-violent as possible (in the words of Wuher, “No blasters!”) for maximum kid-friendliness.

You can get a book featuring the entire alphabet if you donate $15 to their kid’s college fund.