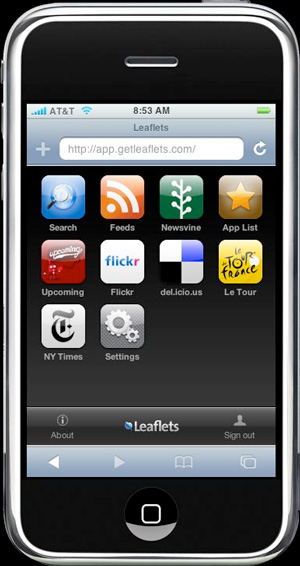 A bunch of great iPhone apps are starting to surface. Just a week after the release of the iPhone, iPhoneDevCamp kicked things into high gear, producing an impressive list of iPhone apps developed during the weekend long event. One standout was Tilt, a game that makes use of the iPhone’s motion control sensors.

One my favorite iPhone apps that has emerged is PocketTweets, which is a great way to access Twitter on an iPhone. The Pownce guys showed me one for their service which should be released soon.

Leaflets is a really cool suite of iPhone applications that was just released today by Blue Flavor, a web design and development company based in Seattle.

Some web services are even launching special versions of their website for the iPhone, like Digg’s iPhone page.

The possibilities are endless as more and more developers dive into the world of iPhone apps. If you have some favorite iPhone apps, let us know in the comments.

UPDATE 1: VentureBeat is reporting on the launch of FlickIM, an AIM chat app for the iPhone that was developed as a side project by Next3.

UPDATE 2: Check out the new ThinCloud Twitter for iPhone application. I like this one even more than PocketTweets, plus it’s much faster. Here’s my write-up on it.