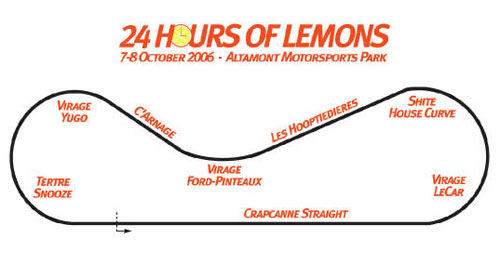 24 Hours of LeMons, the premier motorsports event for beater cars, takes place the weekend of October 7th and 8th, at the notorious Altamont Motorsports Park in Tracy, California. The concept is a 24 hour endurance race for cars that have have been purchased and prepared for racing for under $500. Check out the 24 Hours of LeMons FAQ for more race information.

This endurance race is for cars purchased, fixed up, and track-prepped for a total of 500 bucks or less–and before reaching the grid, you’ll have to survive the Old-Lady Mannequin Slalom, the Baby-Carriage Braking Test, the Brick On the Gas Pedal Challenge, and similar qualifying rounds. Twelve hours into the race, the car voted People’s Choice (for best concept and prep) is called in and awarded a cash prize. Simultaneously, the car voted People’s Curse (for being driven by the biggest jerks) is called in and summarily destroyed. At the end of 24 hours, a gala awards ceremony plies the survivors with trophies, plaques, and four-figure purses paid with canvas bags full of nickels.

UPDATE: Ok, I tested the card out at Ritual Roasters in San Francisco and I was able to get download speeds of around 1000Kbps.