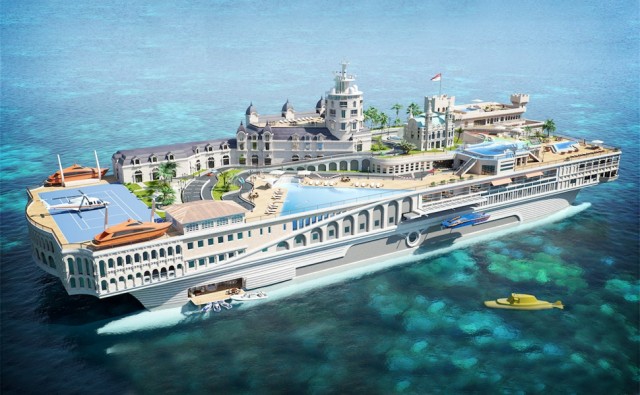 The Streets of Monaco is a 500 foot, 1.1 billion dollar luxury yacht concept inspired by the principality of Monaco. The principality’s landsmarks–the Prince’s Palace, the Casino, and the Gran Prix race course, are all replicated on the deck of the yacht. The concept is by Yacht Island Designs, a UK-based ship design firm that specializes in themed yachts.

The Streets of Monaco is our first design proposal. The theme is based around the Mediterranean principality with the primary focus being the famous grand prix circuit. The idea was to recreate the circuit as a fully functional kart track able to accommodate three karts side by side to allow for plenty of overtaking. By sizing the track in this way it has driven the overall dimensions of the yacht and the placement of the famous landmarks. The Monaco story extends beyond this exterior architecture and into the interior spaces giving a seamless transition as guests move between the various areas of the yacht.