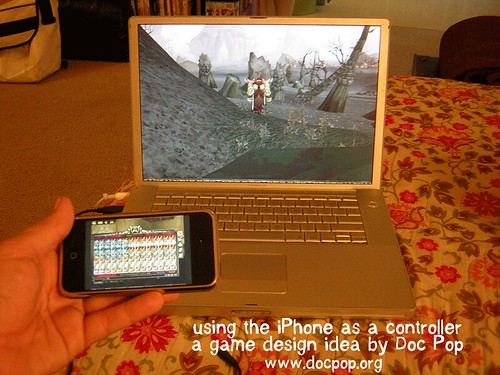 Doctor Popular – the noted San Francisco game theorist, crafter, musician, artist and yo-yo performer extraordinaire – has posted an article in which he envisions the potential applications of the iPhone as an alternate interface for videogames. Rather than merely using the iPhone as a stand-alone gaming platform, Doc suggests using it as a uniquely capable adjunct to games that are currently played on laptop or desktop computers.

Although developing games for the iPhone may be hindered by it’s lack of controls, the iPhone itself could surprisingly make for an awesome game controller itself. Imagine controlling the avatar on your computer over WiFi with your iPhone. Tilting it to move forwards or backwards, selecting weapons from your touchscreen, controlling your weapon via swipe motions. The iPhone could make a great game controller, hell it’s even got a built in rumble pad!

Meanwhile, in his post “Baby Steps to an Augmented Future“, new media producer and gamer Eric Rice theorizes that the iPhone is just one step towards a future where such alternate interfaces have become ubiquitous.

What do the new iPhone, fashion industry, and video games have in common? They might be baby steps towards a future world where the virtual overlaps the real.

The general definition of augmented reality is the combination of computer-generated data (images, videos, etc) with real, tangible things that are located in our ‘real’ world. Most early ventures with augmented reality involve overly-geeky headsets and contraptions to accomplish a simple augmentation of what we see in front of us.

One example of a possible augmented reality interface is Robert Winters’ AUGNAV – or AUGmented reality NAVigation – an imaginary application for a future iPhone that would combine video capture, location-awareness and wireless data access to provide a navigation experience far beyond anything offered by current GPS units.

While a system as advanced as AUGNAV remains at least a few years away, the equally-revolutionary gaming interfaces suggested by Doctor Popular are well within the iPhone’s current abilities. And really, if you’re an iPhone developer, wouldn’t you rather work on something truly innovative, rather than yet another flashlight app?