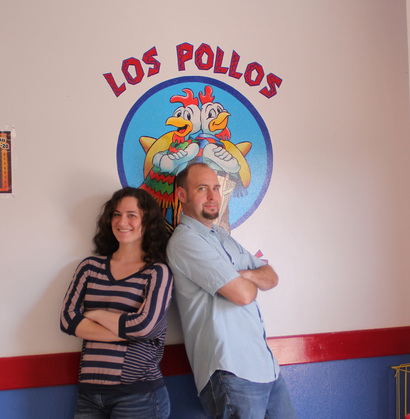 The Harrisons in a completely original pose that we’re quite sure no one else has thought of doing before.

The Harrisons, an Austin-based couple, recently vacationed in Albuquerque, New Mexico and made this video of all the Breaking Bad set locations they visited. They went to Twisters (aka Los Pollos Hermanos), Jesse’s Aunt’s house, Tuco’s hideout, Hank and Marie’s house, Spooge’s house, Hank’s workplace, the “corner where Combo gets it”, Jesse and Jane’s place, the gas station where Walt explodes a car, the gas station where Skyler buys cigarettes (and where Jesse gets his bike stolen), the Kimo theater, The White house, Saul Goodman’s business, the Dog House (where Jesse buys a gun), the Crossroads Motel and the White’s money-laundering front, the carwash.