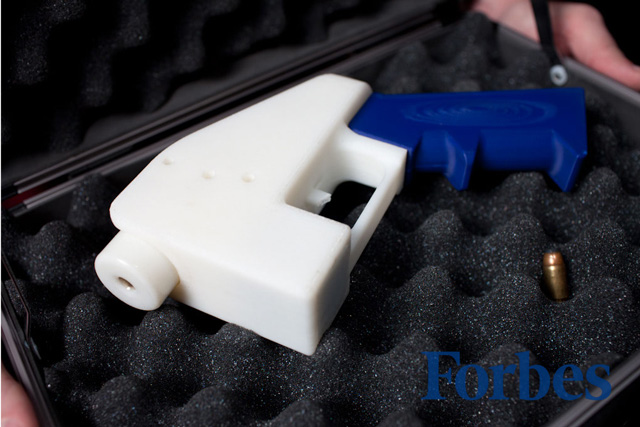 Andy Greenberg of Forbes recently witnessed both a hand and remote test-firing of “the Liberator,” the world’s first 3D-printed plastic handgun, with the gun’s creator, Cody Wilson of nonprofit organization Defense Distributed. More information about the project, including a video, can be found at Defense Distributed and the Liberator’s CAD files are now available at the DEFCAD site. Also, we recently featured a video about Wilson created by Motherboard titled “Click, Print, Gun: The Inside Story of the 3D-Printed Gun Movement.”

…Wilson’s weapon is almost entirely plastic: Fifteen of its 16 pieces have been created inside an $8,000 second-hand Stratasys Dimension SST 3D printer, a machine that lays down threads of melted polymer that add up to precisely-shaped solid objects just as easily as a traditional printer lays ink on a page. The only non-printed piece is a common hardware store nail used as its firing pin.

… A day later, that gun was tested on a remote private shooting range an hour’s drive from Austin, Texas…

The verdict: it worked. The Liberator fired a standard .380 handgun round without visible damage, though it also misfired on another occasion when the firing pin failed to hit the primer cap in the loaded cartridge due a misalignment in the hammer body, resulting in an anti-climactic thunk.