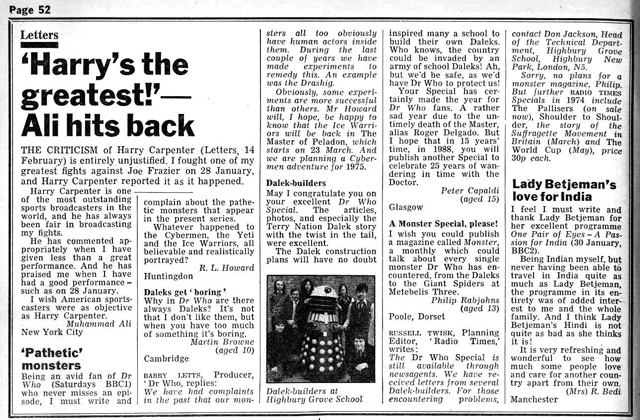 When he was just 15 years old living in Glasgow, Peter Capaldi penned Radio Times magazine in praise of an article they wrote in February 1974 about Doctor Who. It was recently announced that Capaldi will serve as the Twelfth Doctor in the ongoing BBC series.

He says in the letter:

May I congratulate you on your excellent Dr Who Special. The articles, photos, and especially the Terry Nation Dalek story with the twist in the tail, were excellent.

The Dalek construction plans will have no doubt inspired many a school to build their own Daleks. Who knows, the country could be invaded by an army of school Daleks! Ah, but we’d be sage, as we’d have Dr Who to protect us!

Your Special has certainly made the year for Dr Who fans. A rather sad year due to the un-timely death of the Master, alias Roger Delgado. But I hope that in 15 years’ time, in 1988, you will publish another Special to celebrate 25 years of wandering in time with the Doctor.