Photographer Brian Maffit posted an amazing composite image on reddit that depicts a flock of hummingbirds swarming underneath the feeder. The “flock” was actually comprised of just a few birds over the course of a few hours whose ghosted images were reflected back using an angled glass mirror. The image was then further manipulated in Photoshop. Maffitt generously stated that he’ll be sharing a “how-to” on his blog.

If anyone is interested in the technical specs, this was shot with a Canon 5D Mk III at 1/4000/sec, f 5.6, using a Canon 100-400 zoom lens. Composited (obviously) in Photoshop, approximately 70 layers, with a final file size of 3600 px x 11,000 px. Also, these are Ruby-throated hummingbirds, mostly females and juveniles, shot in my backyard in New York State. …Look closely at the birds and you can see the “ghosting” associated with a glass mirror, which at an angle reflects each bird twice (once on the surface of the glass and once on the mirrored back). I was afraid that the artifacting would spoil the setup, but I ended up liking the results even with the double-image.

Maffit also posted a separate photo of a single hummingbird taken from a different angle. 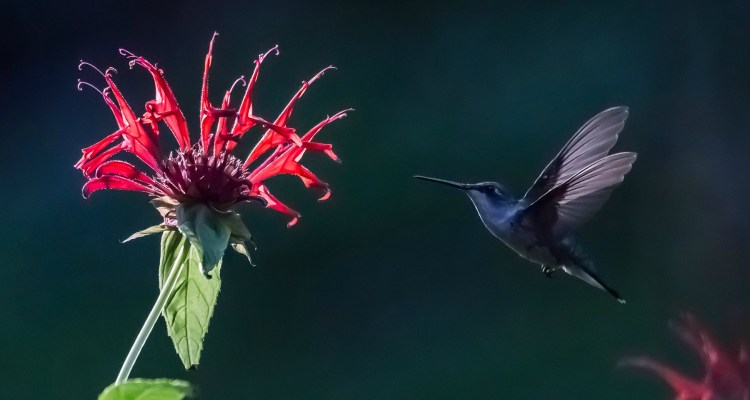