Growth is an amazing photo 2004-2006 project created by Helsinki-based Wilma Hurskainen where she “reconstructed and re-photographed pictures that my dad took of me and my three little sisters when we were children.” As you can see in the resulting photos, a great deal of effort was made to make each modern photo look like their childhood photos, right down to their body positions, outfits (or lack of) and facial expressions. 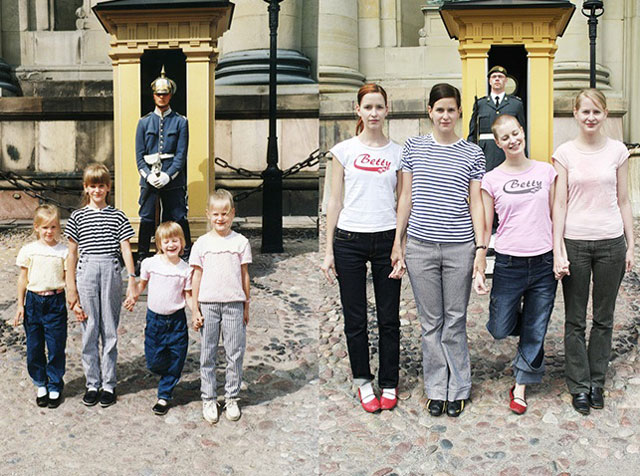 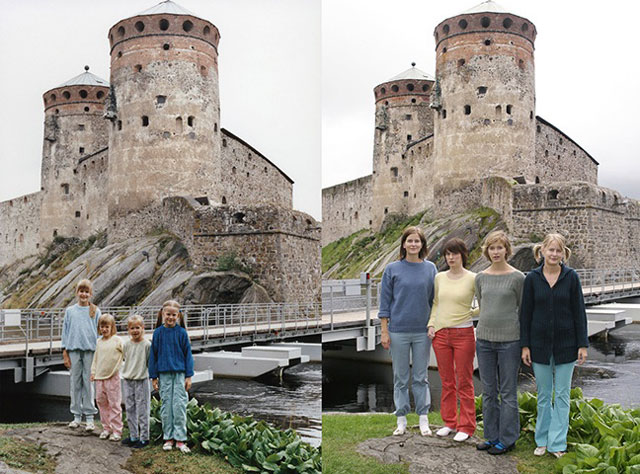 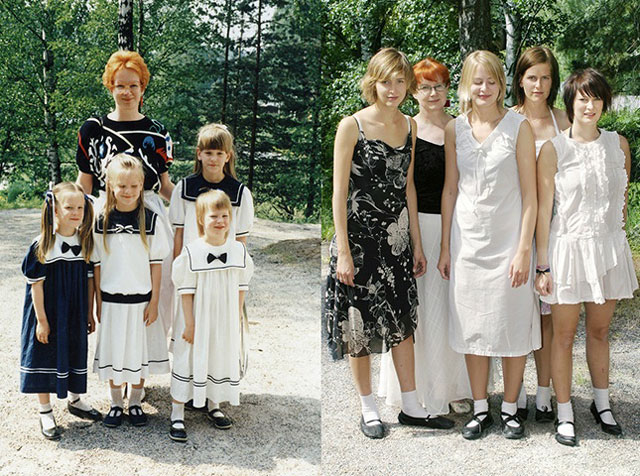 I have always been very attracted by the photograph´s ability to cross time and create this kind of comparisons. There is something sad, almost tragic, about looking at old photographs compared to new ones and seeing how people and things have changed or grown up. After all, it is said that time has been accepted as a common means of measuring life because people are not able nor willing to see the change in themselves. In the pictures it seems as if we were trying to go back to our childhood by adopting the same position towards each other and the photographer´s/spectator´s gaze but we unavoidably fail. We have to fail – there is no return in time.

I am interested in family photographs and the way they are taken, stored and (not so often) looked at. Anyone with any family history can tell that, although the family pictures are supposed to tell a story about a happy, unanimous family, growing up with other people is never simple. Family photographs can be a way of reflecting one´s past and identity, but the pictures conceal just as much as they reveal.

In the comparisons time takes a strange form – it feels as if there was a dialogue between the past and the present moment, like there is in our minds as concerns our own memories A memory is never static, permanent, but changes as we change. By repeating a distant moment something weird is revealed about us as objects of the photograph in the first pictures: the way we play our artificial roles for the photograph. We might not be more than 5 years old, but we already know exactly how to be in/for a photograph. I would love to repeat the process with my sisters in another 10-15 years. But I have to accept that a part of both growth and life is their unpredictability.

photos by Wilma Hurskainen and her dad