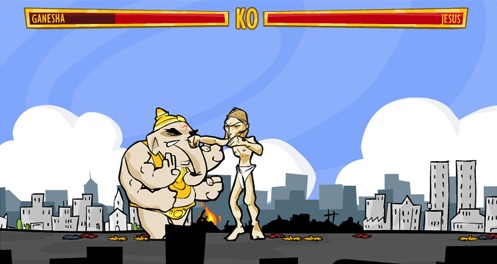 The fine folks at Molleindustria are a team of Italian artists, designers and engineers who appear to view video games as more than mere entertainment, but also as a medium to push sociological boundaries.

We believe that the explosive slogan that spread quickly after the Anti-WTO demonstrations in Seattle, “Don’t hate the media, become the media,” applies to this medium. We can free video games from the “dictatorship of entertainment”, using them instead to describe pressing social needs, and to express our feelings or ideas just as we do in other forms of art. But if we want to express an alternative to dominant forms of gameplay we must rethink game genres, styles and languages. The ideology of a game resides in its rules, in its invisible mechanics, and not only in its narrative parts. That’s why a global renewal of this medium will be anything but easy. 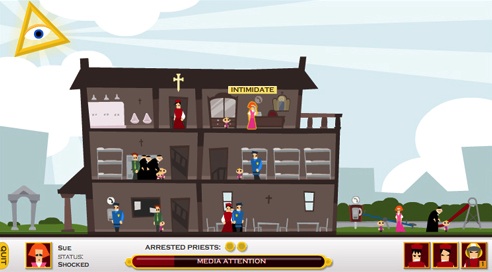 Faith Fighter is just one of their efforts. They have also done fun games like Operation: Pedopriest where your mission is to work for the Catholic Church to intimidate parents from calling cops and reporting your priest’s sexual habits.

Finally, it is worth noting that these fine folks also allow you to wager on where the next terrorist strike will be.