In an illuminating episode of the colorful whiteboard animation series After Skool (previously), guest host Trace Dominguez explains the cognitive bias at the heart of the Dunning–Kruger effect leads people to believe that they are far superior to others in terms of skill, knowledge and/or ability than they actually are. The effect essentially renders an individual unable to recognize their respective limitations.

In the field of psychology, the Dunning–Kruger effect is a cognitive bias in which people mistakenly assess their cognitive ability as greater than it is. It is related to the cognitive bias of illusory superiority and comes from the inability of people to recognize their lack of ability. Without the self-awareness of metacognition, people cannot objectively evaluate their competence or incompetence. 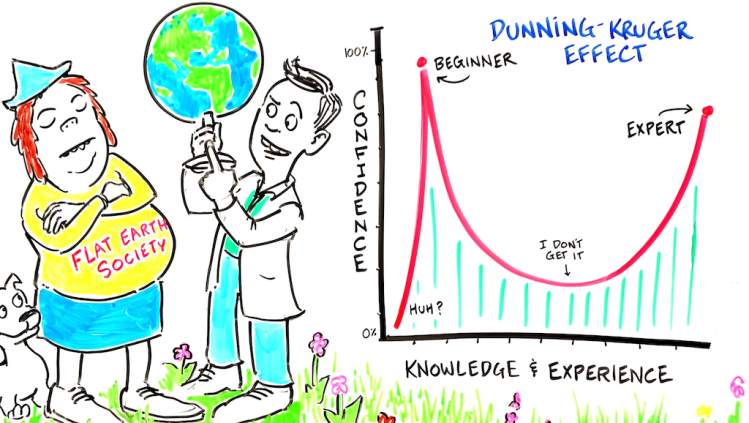 We previously wrote about this particular psychological phenomenon and John Cleese quite bluntly explained how the truly stupid lack the capacity to realize how stupid they are. While Dunning-Kruger is less about stupidity and more about a self-perpetuating subjective illusion, although it can often read as the former.

In 1995 McArthur wheeler walked into a bank in Pittsburgh ready to rob it. He didn’t wear a mask he didn’t have like a fake mustache he was just there robbing a bank in full view of everyone. He even smiled at the security cameras before leaving and going to a second bank to rob that one – later that night the security footage allowed the police to pick him up and take him off to jail which shocked him…’I wore the juice’ he famously exclaimed. Wheeler believed that rubbing lemon juice on his skin would render him invisible to videotape cameras. This is a cognitive bias at work…

Here’s John Cleese succinctly explaining the Dunning–Kruger effect in his own words.