Deciding on America’s best monkey/dog rodeo act is kind of like an Elvis versus The Beatles argument. On the one hand you have the individual achievements of Whiplash and on the other the shared genius of Team Ghost Riders. Both acts have been performing for crowds of thousands across the country for many years. Not only at rodeo events, but also at state fairs and an ever-increasing number of minor league baseball games each year.

In either case it is a collaborative effort between monkey and canine. Specifically white-headed capuchin monkeys in diminutive saddles astride border collies–very smart herding dogs, who I think it is safe to say are doing the bulk of the real work in these acts. The monkeys are there to give an (almost) human face to the show. And wear a sombrero, when needed. While it does seem that the monkeys are, um, “attached” to their steeds, they also do seem to be happy with the ride and can sometimes be seen petting or patting the collies while they are in action. But make no mistake they are passengers and not in the drivers seat. Um, saddle.

Tim “Wild Thang” Lepard was a bull fighter and rodeo clown. But as his number of bull-related surgeries increased, he decided to go behind the scenes and mastermind what would become Team Ghost Rider:

I wanted an act that no one would forget in rodeo and felt performing with three dogs and three monkeys would accomplish my goal.

You’ll find profiles of the whole Ghost Riders team, both dogs & monkeys, on their site. Sometimes Tim talks after their shows. Below you can see them all decked out in pink supporting Tough Enough To Wear Pink, a breast cancer fund-raising and awareness effort within the rodeo community: 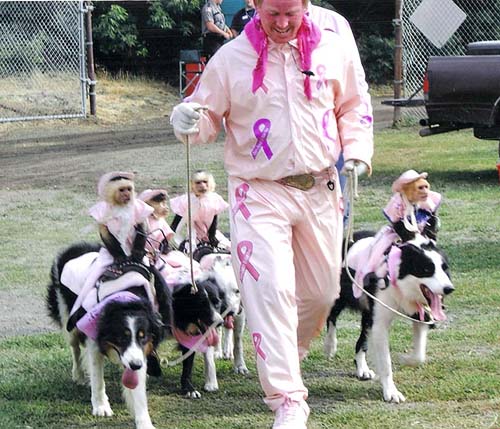 Meanwhile Whiplash is an active middle-aged monkey at 24 (Capuchins can live to be around 50 years old) who balances an acting career along with his rodeo work. Here is an example of Whiplash’s fine work for commercial clients: